Shani Chalisa in हिन्दी and English » 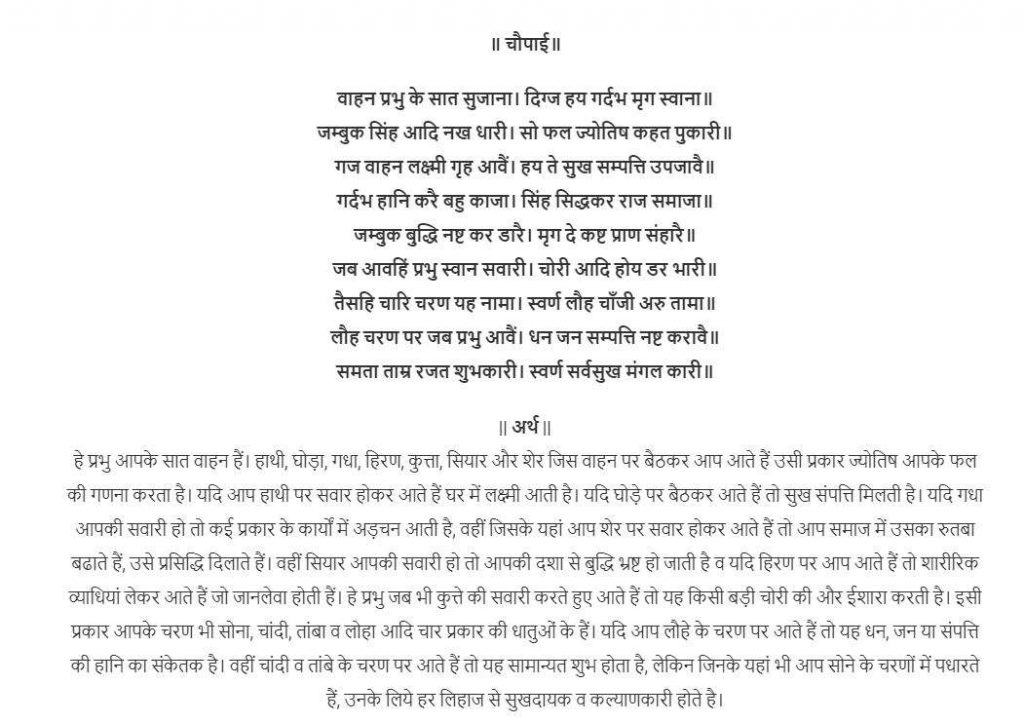 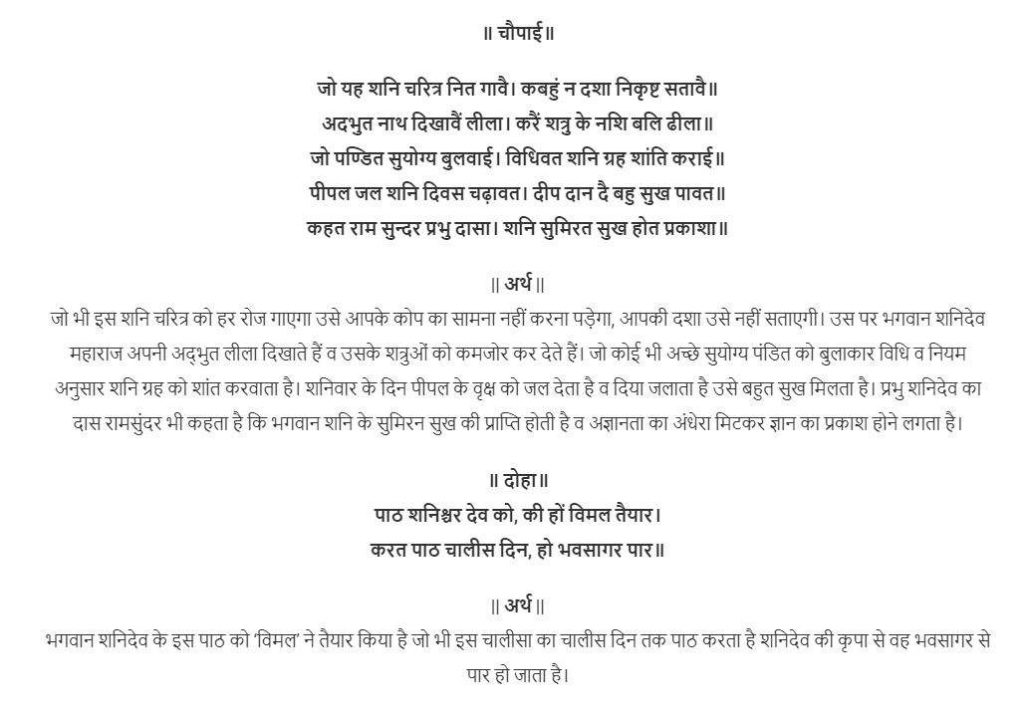 (Oh Lord Ganesha for whom a mountain is like a flower, please be merciful,
Takeaway the troubles of the tortured and raise our consciousness.
Oh Shani Dev – the gracious Lord, listen to my prayers oh victorious one,
Show us your kindness oh lord and protect the modesty and purity of your devotees)

Jayathi Jayathi Shani Dayaala,
Karath Sadha Bhakthan Prathipaala.
Chaari Bhuja, Thanu Shyam Viraajai,
Maathey Rathan Mukut Chavi Chaajai.
(Victory be to the merciful Shani Dev, you are the protector of those who take refuge in you. Oh the four armed one with a beautiful dark skin and a forehead decorated with a pearl studded crown.)

Sauri, Mandh Shani, Dhasha Naama,
Bhanu Puthra Poojhin Sab Kaama.
Jaapar Prabu Prasan Havain Jhaahin,
Rakhhun Raav Karai Shan Maahin.
(Sauri, Manda – these ten names that belong to you, Oh son of Lord Surya, you bring fame to them. When you are pleased or displeased with someone, You can immediately transform him from a beggar to a king or the reverse.)

Parvathhu Thrun Hoi Nihaarath,
Thrunhu Ko Parvath Kari Daarath.
Raaj Milath Ban Raamhin Dheenhyo,
Kaikeyihu Ki Mathi Hari Linhiyo.
(At your will, even simple things can become complex and tough. Your blessings can turn the toughest tasks into simple ones. When you chose to twist the wish of Kaikeyi, the wife of Dasaratha, even Rama had to give up his kingdom and leave to the forest in exile.)

(Even King Harishchandra suffered during your Dasha period, He lost all that he owned and even his wife was sold away. He was forced to do menial work, At a house of a poor sweeper.)

(When you transited through the zodiac sign of Lord Shiva, His wife Parvati (in her first incarnation as Sati) had to suffer injury through incineration in fire.When you looked at the young Lord Ganesha, His head bounced into the sky and was destroyed.)

Paandav Par Bhay Dasha Thumhaari,
Bachi Draupadhi Hothi Udhaari.
Kaurav Ke Bi Gathi Mathi Maaryo,
Yudh Mahabharath Kari Daryo.
(When the Pandavas were going through your Dasha period, They even lost their wife Draupadi in a bet and were left with no belongings. Even the Kauravas were not spared and they lost their sense and wisdom, Sparking the great battle of Mahabharata against the Pandavas.)

Ravi Kah Mukh Mahn Dhari Thathkala,
Lekar Koodhi Paryo Paathaala.
Sesh Dhev-Lakhi Vinthi Laayi,
Ravi Ko Mukh Thay Dhiyo Chudaayi.
(Oh Shani Dev, you swallowed the sun, And went away into the third world, Only when all the other Gods came together to pray to you, Was the Sun saved from eternal obscurity.)

(Riding on a jackal, Shani Dev, takes away all wisdom, sense and intellect, Riding on a deer, Shani Dev grants death and pain. Riding on a dog, Shani Dev curses one with accusations of theft, Making the cursed a beggar and the equivalent of a lowly stone.)

(In a similar manner, you have four different forms of your feet, Made of Gold,Iron, Silver and Copper. When you come home with your Iron feet, You destroy all of one’s wealth and belongings.)

Samatha ThaamraRajath Shubhkari ,
Swarn Sarva Sukh Mangal Bhaari.
Jo Yuh Shani Charithra Nith Gavai,
Kabahu Na Dasha Nikrushta Sathavai.
(Your Copper feet signal that things will be left unharmed, while Silver feet signal many benefits, And brightest of them all, your golden feet bring all types of happiness. Whoever sings your prayers in a manner like this, oh Shani Dev, He is never troubled by your adverse periods.)

(A devotee who is ever prepared to sing with devotion to Shani Dev, And chants Shri Shani Chalisa for forty days, will easily find his way to Heaven)

No votes so far! Be the first to rate this post.

Shiv Chalisa in Hindi and English with Translation